Good morning. I hope you had a lovely Thanksgiving, or if you don’t celebrate, long weekend, or if you had to work, a good time at work.

– It is bad to have dinner with a violent white supremacist, right?

– Ranked choice is coming to Seattle…eventually.

– Wash your hands right now. And I can’t believe it if aren’t vaccinated or boosted, but the good news is you can make an appointment today.

Liberal Redneck: The results of rhetoric

Michael Kosta: New Yorkers to fill him in on the news

Joy Reid: We are a country that chooses violence over and over again

Robert Reich: Does Elon Musk have a right to destroy Twitter?

The KKKrazy Klan of The Dotard Трамп:

Adam Conover: Elon Musk is an idiot (and so are Zuck and SBF)

LegalEagle: Elon bought himself a bunch of lawsuits

– Seattle has a budget.

– My commute has changed a bit since late October. I now take the bus with a bunch of rowdy high school students. Man, I wish I had the free bus when I was a kid. How fabulous, great job everyone who made it happen.

– Hey, you. Wash your hands right now. And get vaccinated or boosted if you’re eligible.

Please join us this evening as the Seattle Chapter of Drinking Liberally gathers for an evening of politics, conversation, and good cheer over a drink.

The Seattle Chapter of Drinking Liberally meets every Tuesday at the Roanoke Park Place Tavern (2409 10th Ave E, Seattle) starting at 8pm out on the back patio (under an awning). The cold weather may entice some folks to hang out in the back room of the pub as well.

I saw Macbeth at Seattle Shakespeare over the weekend. Fantastic performances and staging. It was the final weekend, so this isn’t a review or anything like that.

It is me saying that I was very impressed with their mask policy. Obviously, get vaccinated or boosted is the thing that helps the most in saving lives from COVID-19. But with people in close quarters for a couple hours, masks are also important. And it was mandatory, and at the introduction, they said they would kick people out or stop the show if people weren’t masked.

They aren’t killing the little old ladies who make up their core audience. Don’t be absurd.

Mehdi Hasan: The most defining moments of Nancy Pelosi’s legacy

The Dotard Трамп and Other Dishonorable Liars and Grifters:

WaPo: How Nancy Pelosi became the most powerful woman in Congress

New Coleman Dock, baby! I have walked or biked by it quite regularly, and it doesn’t look ready from the outside. But it’s very exciting. Maybe I can pop into it on my way home from work and take a look. It’s very exciting when new infrastructure opens up.

I am not sure how much credit to give a proposal in a politician’s press release. So maybe I am missing something. But I like the idea of continuing to bypass the design review process for affordable housing in Seattle. I don’t know how much we need the process in general, but certainly for low income housing in the middle of a homelessness crisis, extending it seems like a no brainer.

Please join us on Tuesday as the Seattle Chapter of Drinking Liberally gathers for an evening of post-election celebration. Please note the meeting time and venue change.

– Congratulations to Congresswoman elect Marie Gluesenkamp Pérez! I am sure that there will be a lot of times when I’m frustrated with her, but man what a gap between her and the other possibility.

– King County’s budget passed committee last week. There are so many exceptions, I don’t know how much the body cameras for deputies will make a difference, but it’s probably better than not.

– Go wash your hands right now. And get vaccinated or boosted if you’re eligible.

Трамп and His Imbeciles:

I am writing this on Tuesday night. It’s still too early to tell who is going to control Congress. But! It’s safe to say that Patty Murray is going to win reelection pretty easily.

And far be it from me to give advice to Republicans, who I hope lose every election, but I don’t understand why they keep running on hating Seattle in statewide races. Like what was the last time it was successful, Slade Gorton in the 1990’s? They won Secretary of State and AG, when they aren’t tempted to go full fuck Seattle, more recently.

But part of the reason that we’ve only had Democrats as Governor and Senator for decades is that Seattle people aren’t going to vote for fuck Seattle and it isn’t salient to the rest of the state. Like find a message that doesn’t demonize a large group of people who you want to represent.

Election day is here! If you haven’t dropped off your ballot, yet, do it! Only then will you be permitted to join us as the Seattle Chapter of Drinking Liberally gathers for an evening of electoral politics and drinks.

The Seattle Chapter of Drinking Liberally meets every Tuesday at the Roanoke Park Place Tavern (2409 10th Ave E, Seattle) starting at 8pm out on the back patio. The cold weather may entice some folks to stay in the back room of the pub as well.

Well…a lot can happen in a month. I’ve been rather negligent in gathering polling data and doing these analyses, so here we are on Election Day Eve. I’ll post an analysis based on polls collected through about 5pm today. If there are more polls tomorrow morning, there will be a final analysis tomorrow early afternoon or so.

My last analysis, about a month ago, found Democrats “in the lead” with a 97% probability of taking the Senate (if the election had been held then, that is). Lots and lots of new polls have been published. And it seems that pollsters have been procreating new baby pollsters between election seasons.

There is a bit of good news for Democrats. Incumbent Mark Kelly (D-AZ) has a solid lead over his opponent, Blake Masters. Likewise, Colorado, New Hampshire and Washington seem safe for the Democratic incumbents.

Things are not so good for Democrats in Georgia, where Sen Raphael Warnock (D) is, essentially, tied with Herschel Walker. Bizarre, huh? In Nevada, Sen Cortez Masto’s (D) race has turned around and Adam Laxalt (R) might well be looking for a flat in D.C. soon.

Likely Democratic pick-ups have all but vanished. Rep. Tim Ryan (D-OH-13) once led Republican J.D. Vance for the Ohio Senate race. But Vance has led in 7 of the 8 polls taken in the past 14 days. In Pennsylvania, the Senate race between John Fetterman (D) and Mehmet Oz (R) has tightened, and Oz now holds a very slight lead. Wisconsin? Fuggitaboudit. Sen. Ron Johnson (R) is headed back to D.C. Florida? Not even close. Sen. Marco Rubio (R) will have the privilege of six more years of the job he hates.

Are the polls underestimating chances for Democrats? Maybe. The buzz in the poll aggregation community is that right-leaning pollsters have “flooded the zone” with polls bearing right-skewed results over the past several weeks. Why would they even do that? Wouldn’t that just make them look bad after the election? Either way, tomorrow is going to be “interesting.”

Here is the distribution of Senate seats from the simulations:* 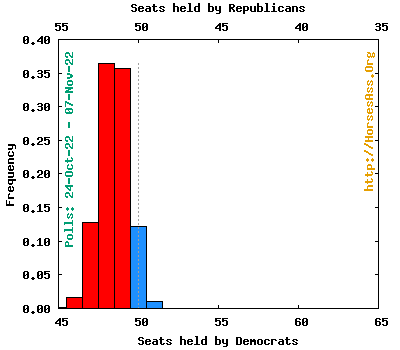 This graphs shows the probability of at least each number of seats controlled by the Democrats:* 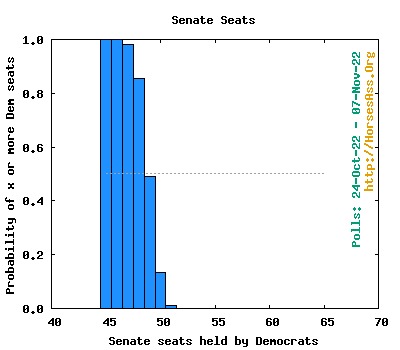 Expected outcomes from the simulations:

This table shows the number of Senate seats controlled for different criteria for the probability of winning a state:* Safe>0.9999, Strong>90%, Leans>60%, Weak>50%

This table summarizes the results by state. Click on the poll number to see the individual polls included for a state.

@ Current party in office
& An older poll was used (i.e. no recent polls exist).
*Analysis assume that independent candidates will caucus with the Democrats.

Details of the methods are given in the FAQ.

Can’t Bring Yourself to Type the Word “Ass”?

Eager to share our brilliant political commentary and blunt media criticism, but too genteel to link to horsesass.org? Well, good news, ladies: we also answer to HASeattle.com, because, you know, whatever. You're welcome!

It may be hard to believe from the vile nature of the threads, but yes, we have a commenting policy. Comments containing libel, copyright violations, spam, blatant sock puppetry, and deliberate off-topic trolling are all strictly prohibited, and may be deleted on an entirely arbitrary, sporadic, and selective basis. And repeat offenders may be banned! This is my blog. Life isn’t fair.